How the world has changed since I started Rebel Recipes!

Back in 2015, veganism was a fringe movement of people who believed, quite passionately, that a diet of food made entirely from plants was better for health, the environment, and animal welfare.

But most considered it to be, well, a little odd!

Then with political, media and celebrity endorsement, climate change became a thing, and veganism started its move towards the mainstream.

At the time, a vegan diet was associated with the things you can’t eat, which didn’t convey the inspiration we were finding by filling our kitchens with plants.

So, along came ‘plant-based’, eating the rainbow became instagram-able, and more and more people around the world munched like herbivores!

I launched Rebel Recipes to explore and showcase how fresh, wholesome, unprocessed plants can be combined into food with super-delicious flavours, amazing textures and vibrant colours.

And the recipes you’ll find here give inspiration for fabulous plant-based dishes from breakfast to night, for all occasions, and with all your friends and family.

Fast forward to today, there’s much more choice for plant-eaters in retailers and restaurants, some good, some not so. As it has always been, Rebel Recipes remains focussed on entirely healthy and genuinely sustainable food made from produce that comes directly from the land.

So, veganism is mainstream, ta da!

It’s been brilliant for Rebel Recipes to be a plant-pioneer, and to see so many more people eating more plants. And, what a momentous change for our world, us humans and our animals.

There’s much more to come from Rebel Recipes, I’d love you to join my journey of plant-based inspiration.

Subscribe below and I’ll send you my Top 5 Recipes using Herbs eBook in return! 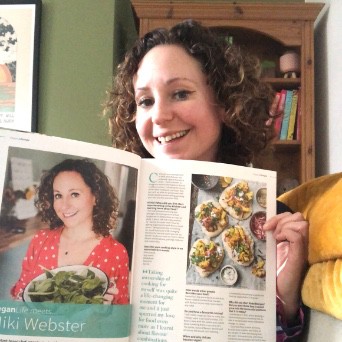 Buy Me a Coffee

And, if you’ve enjoyed using my recipes, I’d love you to support my blog.

I’ll be cooking up a plateful of super-delicious vegan recipes here over the coming months.

To support my work, promote the vegan message far and wide, and of course help keep Dill in kittie food, you can buy me a coffee here.

(Payments via Ko-Fi are processed by Stripe, a global payments platform certified to the the most stringent level of certification available in the payments industry.)